Application under the toughest conditions

At Hydro Precision Tubing in Lichtervelde, Belgium, the materials handling specialist Clark has once again proven that "Built-to-last" is not an empty promise. The application in the cast house demands top performance from two Clark forklifts of the C55sD series every day. The trucks not only have to withstand the enormous heat of the melting oven, but also prove their abilities when handling heavy loads.

Hydro Precision Tubing is part of the Norwegian company Norsk Hydro ASA, an aluminium supplier that operates worldwide along the entire value chain. The Lichtervelde site is one of six Hydro sites in Belgium. The plant has more than 70 years of experience in the development and production of high-frequency welded aluminium tubes. These are manufactured from recycled aluminium in various alloys and with different surface treatments, in diameters from 12 to 76 mm and wall thicknesses from 0.6 to 3 mm. Among the worldwide customers are well-known companies in the automotive and materials handling industry.

Recycling for own production

Clark forklifts of the C55sD series with a load capacity of 5.5 tons have been working on the re-melting part of the cast house for a little over a year. Old aluminium is melted here at temperatures of up to 700 degrees. Their task is to remove the dross from the hot furnace after each melting process before it is refilled. Strictly speaking, only one Clark forklift truck performs this task. Since the operation runs around the clock, the second forklift serves as a back-up and for transporting parts within the cast house. "We only shut down the melting oven and casting furnace once a year for maintenance," explains Yves Viaene, Manager Foundry, Hydro Precision Tubing. "If a vehicle breaks down for any reason, we need to have a replacement truck on hand immediately so that production does not stop. For this reason, we have purchased two identical Clark forklifts."

In order to remove the dross from the furnace, the truck has an attachment with a rotating 5-metre long mandrel. At the end of the mandrel is a scraping device with which the truck removes the dross. This is not an easy task, as the forklift is exposed to very high heat around the clock, despite the long distance from the oven.

Tailor-made for the application

In order to be optimally equipped for the demanding task, the trucks had to be protected against the intense heat on the one hand and equipped with additional safety features on the other hand, in order to meet Hydro's strict safety regulations. Clark's dealer in Belgium, the company Hendrik Deceuninck based in Izegem, took a close look at the application and the specifications and then presented Hydro with a forklift operation concept, taking into account the special requirements. "We had to protect all heat-sensitive electronic parts against the effects of heat," explains Marino Dendooven, sales consultant at Hendrik Deceuninck. "The windscreen was fitted with additional heat-resistant glass to prevent it from cracking, and the air conditioning system was also protected against the heat. In order to comply with Hydro's strict safety regulations, the vehicles are equipped with the Clark Blue Safety Light, which is attached to the top of the overhead guard frame and projects a large blue dot onto the floor. "In this way, people and other forklift drivers are warned of approaching vehicles," says Marino Dendooven. The Deceuninck company also enclosed the Blue Spot to protect it from heat - as well as the hoses of the rotating attachment. The OptaFleet fleet management system is used to monitor the engine temperature of the truck. This is an online-supported management instrument that can be used to map all performance data. With Hydro it warns the driver, if the truck is overheating. The mast is also of particular importance in the demanding task of the truck, which is put under enormous strain by the heavy attachments. "The predecessor vehicles of a market competitors were constantly defective because the mast could not withstand the hard application," says Yves Viaene. "We have now solved this problem with the Clark forklifts. Clark keeps its Built to Last promise."

The robust forklifts C55sD are specially designed for heavy loads and tough applications. Equipped with a fully automatic 2-speed transmission, wet multi-disk brakes and a solid chassis, this series is particularly powerful and durable. "Especially the mast with a robust torsion-resistant 6-roller fork carriage and adjustable inclined support rollers ensures the best possible distribution of the load and minimal play," explains Marino Dendooven. "The C55sD is therefore ideal for Hydro's demanding applications".

Hydro's employees also had a say in the decision to purchase the trucks. Yves Viaene says: "Our employees tested some of the competition vehicles in advance, because after all, they are the ones who have to work with the trucks every day. They were enthusiastic about the Clark forklifts right from the start". And he adds: "Great praise also goes to Deceuninck, who gave us excellent advice all round and met our requirements in the best possible way, either with regard to the strict safety regulations or the special requirements for the equipment of the forklift trucks". Hydro bought the Clark forklifts and maintains the equipment itself in its own workshop. "If we should ever have any major problems," says Yves Viaene, "we know that Deceuninck will be on hand immediately. A quick response time in the event of problems is very important to us.

Because the Clark forklifts have proven so successful, Hydro has purchased two more Clark counterbalanced forklifts. These are a GEX30 electric forklift and a third C55sD diesel forklift, which differs from the existing vehicles only in its triplex mast. Although it is used in another department, it should also be able to step in if one of the other forklifts should fail – because better safe than sorry. 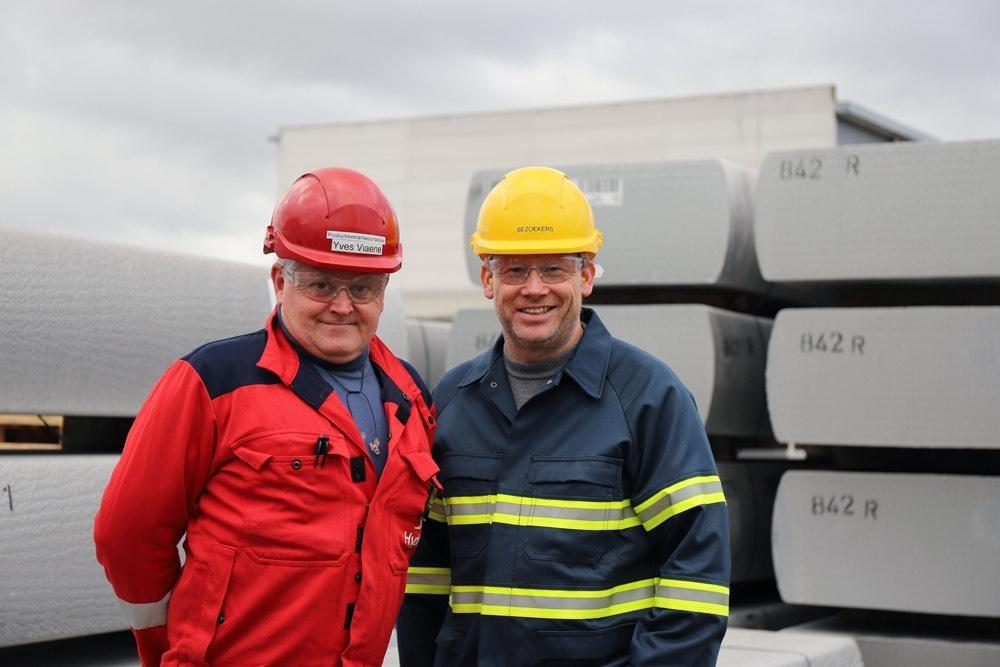 The aluminium group Norsk Hydro ASA was founded in Norway in 1905 and is the world's only supplier of aluminium products that is represented in all segments of the aluminium market – from bauxite mining and alumina refining to the manufacture of numerous special products for a wide range of industries and recycling and reuse. The Group employs 35,000 people in 40 countries on all continents. The sales and trading activities of the aluminium specialist cover the entire value chain and serve more than 30,000 customers. The Group's business areas are bauxite & alumina, energy, primary metals, rolled products, extruded solutions and global services. Since the process of transforming bauxite into aluminium requires a lot of energy, Hydro also has extensive experience in the production of renewable energy and hydropower. The company operates a total of 20 hydropower plants in Norway. In 2019 the turnover was 149.766 M NOK. In Belgium, Hydro produces a wide range of aluminium products with its extrusion plants in Raeren and Lichtervelde, the cast houses in Ghlin and Lichtervelde, the welded tube plant in Lichtervelde, and the aluminium construction systems in Landen. The company has around 830 employees in Belgium and produces aluminium products that are sold worldwide.

Gold of the 21st century

Aluminium is a versatile material because it is strong, light and available in large quantities. The global demand for aluminium is increasing by about four per cent annually. In Germany, for example, the automotive industry requires a large quantity of aluminium. A great deal of electricity is needed to produce the required quantities of aluminium. Since recycled aluminium requires only five percent of this amount of energy compared to the production of primary aluminium, the recycling of aluminium scrap not only saves energy but also, and above all, minimizes pollutant emissions and secures the supply of raw materials. The purity and low melting point (660°C) guarantee the high recyclability of aluminium. In addition, the cycle of reprocessing is infinitely repeatable without any loss of quality - an estimated 75 percent of the aluminium ever produced is still in use and has in some cases already been through multiple recycling processes.