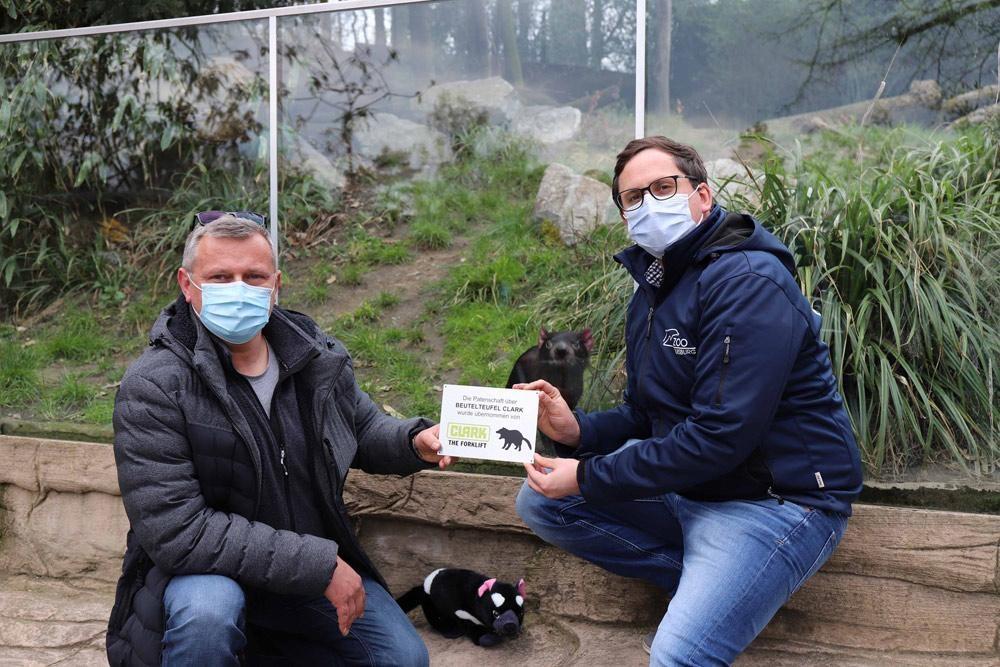 The materials handling vehicles manufacturer Clark has proved that Duisburgers stick together in times of crisis by sponsoring an animal at Duisburg Zoo.

Duisburg Zoo has been known far beyond the Duisburg city area for more than 80 years. Whether large or small – everyone has enjoyed carefree hours there far away from the hustle and bustle of everyday life. But in order to run this oasis, which is so appreciated by visitors, a lot of money is needed, most of which is raised by the daily visitors. The Corvid-19 pandemic and the long lockdown that accompanied it have led to major losses in turnover. Reason enough, Clark thinks, to give the popular Duisburg destination a financial helping hand.

Clark chose a Tasmanian devil, as the cute little animal is also called, as his god-animal. As chance would have it, this animal is also called "Clark". Clark's fellow species now only live on Tasmania. While they were hunted there until the 1930s to protect livestock, they have now been under protection since 1941. Their population had declined so much that they were threatened with extinction. In the meantime, however, the population has recovered.

Clark, the little Tasmanian devil at Duisburg Zoo, doesn't have to worry about anyone trying to kill him. The animal sponsorship ensures that he never lacks food and medical care. Clark and his mum Coorah live peacefully together in a spacious enclosure at Duisburg Zoo. They have never seen Tasmania, because Clark and his mum originally come from Denmark. Copenhagen Zoo is the only zoo in Europe that breeds pouched devils and transfers some of the animals born there to other zoos. Here they are to be marvelled at by visitors and sensitised to the living conditions of pouched devils. Incidentally, Duisburg is the only zoo in Germany that cares for and exhibits these predators.

In the wild, the angler devil usually feeds on carrion. It eats small mammals such as wombats or sheep, as well as birds, insects, frogs or reptiles. The angler devil devours its prey completely – including organs, bones and fur. The small glutton can consume large quantities in a short time. It eats up to 40 percent of its body weight at once.

Thanks to the good care at Duisburg Zoo, Clark and his mum don't have to worry about finding food. Their menu includes small animals such as rabbits, mice and chicken. The meat is offered to the animals playfully. After all, the animals should not get bored. That is why they have to "work" for their food in the zoo.

The Tasmanian devil owes its name to its black fur, its wild nature and especially its ears. When the Tasmanian devil gets excited, they turn a bright red colour. In these situations, it also secretes a foul-smelling secretion and emits a shrill scream that can be heard over a long distance. Thank goodness Clark did not do this when Clark Europe staff visited the sponsored child.